This is your time to find the focus and tools to say, 'Yes! I am ready. I am here to bring my Graphic Novel to life.'

The Graphic Novel Development Intensive is what you need.

Here we bring together the combined wisdom and experience of SAW instructors Tom Hart, Jess Ruliffson and Emma Jensen to provide you with inspiration, advice, critique, motivation and structured plan forward.

Through access to unique learning resources, a vibrant community and regular special events with comics professionals, you will gain insights into what it takes to realize your vision.

Make the decision to make your book happen. 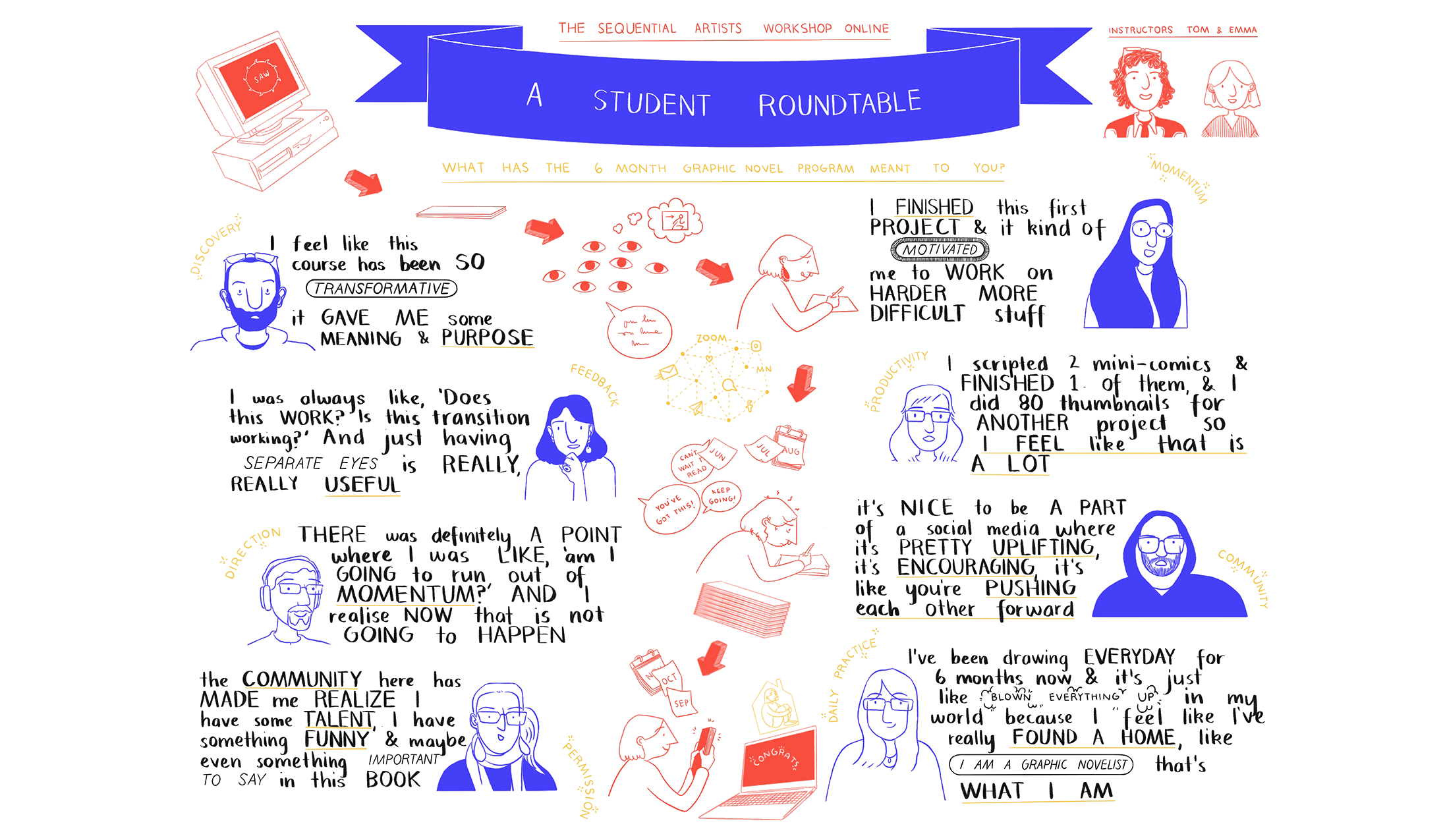 You will have the support of SAW's professionals who have been where you have been, felt what you have felt. Interact with them through the online community page, weekly Zoom check-ins and regular office hours.

Tom Hart is a champion of comics education who founded SAW in 2011 to be the comics school he never had. He has since released half a dozen graphic novels, instructional manuals and short comics, including his NY Times best selling graphic memoir, Rosalie Lightning.

Jess Ruliffson is an award-winning cartoonist who has lectured and taught workshops at The School of Visual Arts, The Drawing Center, and The Center for Cartoon Studies. In 2017, her work was shortlisted for Slate's Cartoonist Studio Prize. In 2022 her latest graphic novel, Invisible Wounds, will be released through Fantagraphics.

Emma Jensen is an Australian comics artist, editor and educator based in Gainesville, Florida. She came to SAW for the year long program in 2018. Since then she has self-published six zines, and has had her work included in Ink Brick and kus magazines.

“I feel like the past two weeks in SAW have been the most productive art weeks I've ever had. My story, in my mind and on paper (both digital and real paper) is taking shape. I have never been more excited at the prospect of actually getting somewhere with this.”

“I got my first book in the mail today! I couldn't have done this without all of you and without SAW. I have to say it feels amazing to hold a physical copy of my first book in my hands. I thought a digital copy would be enough but I like this more than I thought I would.”

“I've finished the planning stage for that album cover I've been juggling with this program. Sorry this isn't technically my graphic novel but I used the coursework to help me through all this, too. The "Honing in on your idea" and "Parameters and Formats" sections were instrumental to working through my anxiety and committing to ideas.”

“I'm still getting the hang of the range of "finished" in this kind of work and this piece feels kind of like a breakthrough to me - the result of the SAW courses I've been taking and finding this great community.

You know, the kind of thing you look at a couple of days later and say to yourself, "Did I really make that?"”

“I am really appreciating the Graphic Novel Group right now. Creative work is hard in a way that I think only other creative types can fully understand. So thanks for your encouragement. ”

“My dear Graphic Novel Development Community, I just learned that I received a grant to create my graphic novel "The Ruins of Everything I Love". I owe a lot to this community. Thank you for your help, without you I would not have been able to do this. ”

“Thank you from the bottom of my heart for creating this amazing place/space. Unlocking the Pandora's box of creating art via SAW has been a fantastic, emotional, and enlightening ride. My time at [SAW] has been a transformative and glorious gift. I cannot express how much it has meant to me.”

“It is a delight to be creating art for others to see and for us to see theirs in this community, it is energizing. ”

“I feel so oriented right now! Thank you! I just got a little tear in my eye. I am having so much fun!”

“My goals changed drastically once we were into the course and I realized I lacked the basic skills necessary to serve my graphic novel idea. So the best things I got out of the course were developing a daily drawing habit, learning patience, participating in a nurturing creative community, and of course soaking in Tom and Emma’s passion and wisdom.”

“This course and has been life-changing. It introduced me to an art form that has become the main focus of my practice. It’s given me a space to combine drawing and words, and to place these pieces in a genre and literary/historical context in a way that feels personally meaningful. Thank you for creating this space!”